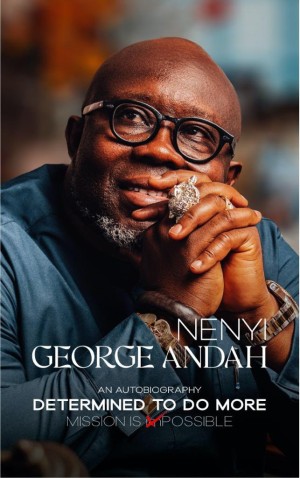 Determined to Do More: The Mission is Possible (An Autobiography)

Determined to Do More: The Mission is Possible (An Autobiography)

Journey along with Nenyi George Andah as he weaves stories of his childhood, teens and adulthood, guided by his Can-Do attitude. His captivating and exciting life stories provide a brilliant tool for anyone to imagine their future. – Geraldine Nartey (nee Andah)

Determined to Do More is an uplifting story of struggles, successes, personal tragedy and an unending desire not to give up. – Ras Mubarak, Former MP, Kumbungu Constituency

My recommendation is to read how the last child of John and Theresa Andah got to where he is today. You wouldn’t struggle to go through in a few hours of light reading. – Ato Afful, MD, Graphic Communications Group Limited

The life of Nenyi George Andah as detailed in this thriller is so captivating. Readers will be held spellbound by the roller-coaster events that define his illustrious life. – Dr Joseph K. Essibu

The story of the young man who saw the possibilities of mobile money long before anyone believed Ghanaians could be persuaded to appreciate the merits of cashless transactions. – Elizabeth Akua Ohene, George Andah’s Special Grandma

Nenyi George Andah is a Politician, a Business Leader, Strategist, Commercial Executive and Management Consultant with specialization in Marketing and the telecommunications sector.

He is passionate about translating business strategy into significant commercial impact and has a proven track record of leading and delivering business objectives.

Educated at the Kwame Nkrumah University of Science and Technology (graduated with a BSc in Biochemistry) and subsequently at the University of Ghana Business School, Legon, he comes with a cumulative wealth of experience, which he draws from active work at different levels of the telecommunications industry in various capacities.

For Nenyi, nothing is more fulfilling than being part of a team with similar interests, and an organization that values and respects its employees.

His career has covered:-
- MMRS Ogilvy Advertising Agency, as a marketing communications specialist at MMRS Ogilvy, where he worked as an Account Director for a little over a year.
- Guinness Ghana Limited as Brands Manager for Guinness Foreign Extra Stout
- SG-SSB Bank as Head of its new ‘Sika’ Card Centre.
- Guinness Ghana Breweries where, for over a period spanning nearly five years, he took up various key appointments, including Innovations Manager, Marketing Manager for the Stouts and Marketing Director of Guinness Ghana Breweries Limited

He moved to Bharti Airtel, Nigeria, where he served for a period as Chief Marketing Officer for Airtel’s Nigeria operation and lead to team rebranding effort from Zain to Airtel.

The Board of Globacom appointed him as Chief Operating Officer of Glo Mobile Ghana Limited where he led the Ghana team to successfully launch the Glo Mobile Ghana operation, acquiring record 1 million active subscribers within the first 100 days of launch. He subsequently become Regional Director Marketing Promotions for Globacom (Nigeria, Ghana and Benin Republic).

He is the Founder/CEO of Rudder Solutions, where he shared his vast wealth of expertise with a broader section of the Ghanaian and Africa’s business communities.

He is a founding member of OccupyGhana, playing a key strategic role in the programs driving good governance, fighting corruption and putting in place systems and structures to make Ghana work again. He took a backseat in OccupyGhana strategy before entering frontline politics in 2015.

He believed that the quality of leadership being experienced in Ghana has not been what Ghana deserves and took a stand to get off the fence and got into frontline politics.

He is a former Member of Parliament for the Awutu Senya West Constituency, a former Deputy Minister for Communications, and currently the Acting Akyempem Odefey of Senya Beraku Traditional Area with the stool name Nenyi Kobena Andakwei VI.

Be the first to review “Determined to Do More: The Mission is Possible (An Autobiography)” Cancel reply

An Available Vessel for the Lord’s Pleasure

Justice Daniel Francis Annan: In the Service of Democracy

The Black Star: The Autobiography of C.K. Gyamfi (Hardcover)

Perseverance Conquers All: The Autobiography of Kantinka Kwame Donkor Fordwor

The Ghana Voter Registration 2020: Dynamics and Risks of Political Contestation in an Emerging Democracy

Africa in Search of Prosperity

This Nation Must Change

All Things Bright and Beautiful