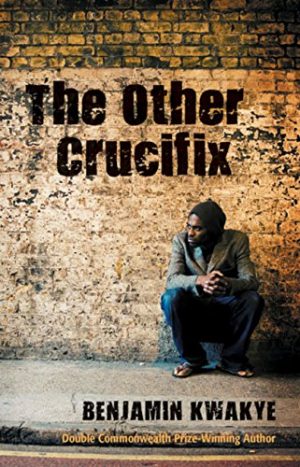 The Other Crucifix is a unique third novel by Commonwealth Prize winning author Benjamin Kwakye. The novel deals with the African immigrant experience and the struggles of a Ghanaian student in the US. This genre also features in Ghanaian literature by Aidoo’s Our Sister Killjoy and Armah’s Fragments and Why Are We So Blest. But in The Other Crucifix, Kwakye presents a contemporary approach by engaging with American college life in all its ramifications in the transformation of a Ghanaian youth and shows how his protagonist’s immersion in that experience alienates him from home and memories of Ghana fade, until his Uncle Kusi’s death in a coup d’état. The narrator, sympathetic and yet provocative offers a hopeful vision in a world full of drama and intrigue.

The Other Crucifix – Benjamin Kwakye

Geosi Reads, my fellow countryman and blogger, is a big fan of the Ghanaian novelist Benjamin Kwakye. I have promised him that I will read Kwakye’s novels so that I can have an informed discussion with him. I had meant to read the books in their order of publication. But I picked up Kwakye’s third and latest novel, The Other Crucifix, just to thumb through, got hooked and ended up reading the entire novel.

The Other Crucifix (2010) is set in the 1960s. Jojo Badu, a young Ghanaian man, has been accepted into The University, a top college in the United States. He leaves his family and country but he has every intention of returning to Ghana, after his studies, to contribute his efforts to the development of the country. At The University, he grapples with race issues, culture shock and campus politics all while trying to come to terms with his new foreign student status in the Civil Rights era in America. His growing sense of disconnection with Ghana is made worse when the country suffers a coup d’etat in which he loses a beloved family member. Jojo will graduate from The University and move on to The Law School, where he will get embroiled in student protest. Jojo will overcome his struggles and “convinced that his future in American held much promise”, will settle into his new life.

Benjamin Kwakye attended Dartmouth College and Harvard Law School and his experiences at these educational institutions have informed the characters and the plot of this novel. The Other Crucifix details a unique immigrant experience, that of the African student in an American college. It is an experience that I’m familiar with, having arrived in the US as a foreign student in 1989. Like Jojo, most final legs of the foreign student’s initial journey to the school involve a bus. Most arrive alone, not with their parents. The foreign student will watch while his/her American cohorts bid farewell to their parents and loved ones. And it is on this first day that the feelings of isolation, alien-nation, a disconnection from, but also a longing for, Africa take root. In these first days, there are questions about one’s accent, the pronunciation of one’s name and even questions about Africa not intended to wound but which nonetheless do. Then comes the process of carving out a home and a space of one’s own that can nourish and sustain the student though the four years of study. Jojo, like most first-year African students, finds it difficult initially to connect with other African-American students. Being black, and of African descent, does not mean that he has the same understanding of race and racism as his fellow African-American students. Of an incident when he is called the n word, he says:

…not that I was devoid of race consciousness. I knew the word had negative connotations, but it is one thing to read and another to live and experience it. Without the context that gives words bone and flesh and form, without the torrid undercurrent that gives certain words meaning, it seemed like a bad joke rather than a malignant query. If I were asked that question years later, I would fully experience its flesh, its bones, its venoms and I would have my arms ready to counter.”

The majority of Africans who leave the continent to study at elite American colleges and universities will never return to Africa. Most parents and family members are not inclined to listen to any detailing of how hard life can get for the foreign student for fear that their child may announce a return back home. Therefore, Jojo’s tenure at The University represents the first stage of the loss of home and the slow erosion of his identification with Ghana. His experiences at The University and at The Law School form the foundation and the context of his engagement with his new home and the dis-engagement with his native homeland.

This story resonated and struck a chord with me. It also stays true to the experiences of countless Africans who go to America in search of a good education and a bright future. But it is also Jojo’s journey. Kwakye’s protagonist is exasperating. His manners, his views on women, his hestitation when action is called for, and his many insecurities drove me nuts  But it was also easy to sympathize with him as he valiantly tried to make sense of, and to improve upon, his situation. By the end of the novel, Jojo had matured and had shed his outsider-trying desperately-to belong attitude. He had developed into a young man capable of taking an administration to task for its treatment of black students.  There were points in the novel that were decidedly weak, points that were not emotionally compelling. I feel that Kwakye shied away from fully depicting the suffering and torment that someone like Jojo would have experienced.

Nonetheless, I’m impressed by the book. It is among a select number of books that describes the African student’s journey as an American immigrant.  It is a well-written story of story of struggle and survival. Benjamin Kwakye has won the Commonwealth Writers Prize for Africa twice with his two previous novels, The Clothes of Nakedness and The Sun by Night. I intend to read both of these novels. But for now,

I highly recommend The Other Crucifix.

Benjamin Kwakye was born in Accra, Ghana and attended the Presbyterian Secondary School in Ghana and Dartmouth College and Harvard Law School in the US. At Dartmouth, he majored in Government (with an emphasis in international relations), spending trimesters in Arles, France and the London School of Economics (LSE). He wrote and published poetry while in college, served as editor of Spirit (a literary journal of the Dartmouth College African American Society) and received the Society’s 1990 Senior Honor Roll for outstanding leadership, distinguished service and intellectual and artistic creativity.

Kwakye has served as Resident Novelist of Window to Africa Radio and Afriscope Radio with Cyril Ibe, reviewing a number of African and African related titles on the air.

He is a director of The Africa Education Initiative, a non-profit organization dedicated to promoting science education in Africa. He lives near Chicago.

Be the first to review “The Other Crucifix” Cancel reply

The Gonjon Pin and Other Stories: The Caine Prize for African Writing 2014

A Girl Says No! – An Anthology

African Violet and Other Stories: The Caine Prize for African Writing 2012