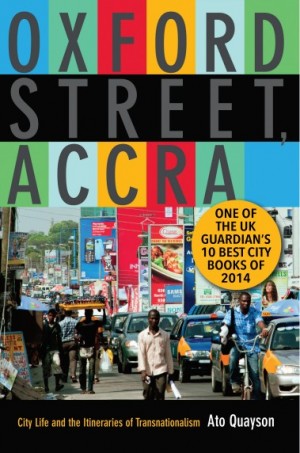 In Oxford Street, Accra, Ato Quayson analyzes the dynamics of Ghana’s capital city through a focus on Oxford Street, part of Accra’s most vibrant and globalized commercial district. He traces the city’s evolution from its settlement in the mid-seventeenth century to the present day. He combines his impressions of the sights, sounds, interactions, and distribution of space with broader dynamics, including the histories of colonial and postcolonial town planning and the marks of transnationalism evident in Accra’s salsa scene, gym culture, and commercial billboards.

Quayson finds that the various planning systems that have shaped the city—and had their stratifying effects intensified by the IMF-mandated structural adjustment programs of the late 1980s—prepared the way for the early-1990s transformation of a largely residential neighborhood into a kinetic shopping district. With an intense commercialism overlying, or coexisting with, stark economic inequalities, Oxford Street is a microcosm of historical and urban processes that have made Accra the variegated and contradictory metropolis that it is today.

“Oxford Street, Accra offers a fresh portrait of a rising African metropolis by one of the most original and skilled critics of the African condition. Deeply researched and packed with detail and bold in scope and analysis, Oxford Street, Accra is a unique addition to the growing body of work on contemporary African Urbanism. This extraordinary book shows the extent to which the future of urban theory might well lie in the global South.” – Achille Mbembe, author of Critique de la raison négre.

“What can a street teach us? In Oxford Street, Accra, Ato Quayson helps us go beyond the superficial spatial cues of this seemingly typical urban African street. He investigates the people and their interactions, in the past and present, and how these cumulatively create a sense of place. It’s an anthropological framework for examining Accra from the ground up: not its concrete structures, but its migrations – of Ga, Osu, Afro-Brazilian, Danish and Lebanese, and today’s traffic of Ghanaians and expats – and the social, economic and political forces that make the Osu neighborhood.” — Victoria Okoye, The Guardian

“[A] work inspired by more than a decade of research by Professor Ato Quayson into the cultural shifts and influences that inform the bustling, vibrant commercial corridor known as Oxford Street in Accra’s Osu district….Quayson traces oral histories, shares pieces of colonial correspondence and recounts conversations with urban denizens on their salsa and gymming hobbies. Even the pithy tro tro and billboard slogans aren’t missed in his analysis, which invites the reader to engage with the ongoing discourse on Accra’s urban street life.” — Victoria Okoye, UrbanAfrica.net

“Oxford Street is an erudite and extraordinary book. After reading it, I was amazed by how much a street can teach and inspire. I would recommend this book to geographers, anthropologists, and to anyone who is interested in African culture and transnationalism. Easy to read and compelling in many parts, the book is an excellent companion for undergraduate and postgraduate courses, and it makes for an interesting read for any transnational scholar.” — Zhuyun Amy Zang, Society & Space

“Oxford Street, Accra is a magnificent book for all ‘students’ interested in a nuanced cultural and economic analysis of global urban studies. … By reading this book I realized that Quayson is many things together: he is a historian and an ethnographer, a structuralist and a post-structuralist, a political economist and a culturalist, a phenomenologist and a distant observer. Maybe it is because he has so many perspectives that this book can be deemed as important; maybe these are some of Quayson’s own expressive fragments.” — George Mavrommatis, Postcolonial Studies

“Oxford Street is an important book that will provide a critical point of reference for anyone writing about urban Africa, joining AbdouMaliq Simone’s For the City Yet to Come (Duke University Press, 2004) as a seminal text in critical urban studies.” — Jennifer Anne Hart, International Journal of African Historical Studies

“In this ambitious theoretical and empirical project, noted postcolonial literary scholar Ato Quayson takes Accra’s most prominent commercial district as an entry point into developing a nuanced and diverse historical portrait of the contemporary city. This single-city monograph from Africa is a rare and much-needed addition to the growing body of research on African urbanism. As urban studies increasingly takes its cues from the continent, Oxford Street is an indispensable asset to current debates on history, method, life and policy in the African city.” — James Christopher Mizes, International Journal of Urban and Regional Research

“[A] book which, by melding literary analysis with anthropological approaches, rethinks the relations of space, capitalism, and self-making by focusing on the taken-for-granted quotidian practices and aesthetics of urban life.” — Claudia Gastrow, Journal of the Royal Anthropological Institute

“Quayson has superseded his goal of forestalling a superficial reading of Oxford Street as a mere outpost of globalization by giving readers a deep understanding of the whole of Accra, its history, and its spatial practices.” — Adedamola Osinulu, Journal of African History

“Oxford Street is much more than a history of Accra refracted through the prism of its most cosmopolitan and capital-intense corridor. It is also a meditation on contemporary forms of urbanism in Accra that are linked to and depart from the past. . . . [T]his book resists easy description.” — Carina Ray, PMLA

“Quayson provides a framework for thinking about Accra’s particularities, its infrastructures and historical layerings that order creative ways of life. What is it about Accra that speaks to various people, that creates intimacy and makes people feel that Accra is theirs? The city has a feeling of closeness: small personal spaces rapidly open into broader senses of past and feelings of futurity. Quayson stands still, paying attention.” — Jesse Weaver Shipley, PMLA

“Oxford Street, Accra does not just offer innovative ways of bringing the insights of diaspora and transnationalism into conversation with urban studies. In a reversal of the usual presumed unidirectionality of inluence and practices, it also presages the kinds of developments we have been seeing in the West. . . . How might we see a text like Oxford Street, Accra as an invitation to conversation and critical literacy that go beyond an initial gesture in our institutions of higher learning to internationalize our curricula?” — Alissa Trotz, PMLA

“Oxford Street projects a city defined by the perpetual motions made by its disparate units to connect to one another and to other places. It becomes obvious in the conclusion, where Quayson juxtaposes Lagos and Accra, that life in West African capital cities has a lot to say about the nature of contemporary global existence.” — Adélékè Adéeko, PMLA

“[A] courageous piece of writing, whose unity and consistency of method contain brilliant successes and (fewer) weaknesses. As a reader, I embraced both aspects equally because only together do they embody the coherence of a conviction that imbues the entire intellectual project. The pleasure of the text resided in the fact that this coherence emerged startlingly through the autobiographical narrative when it was least proclaimed.” — Anjali Prabhu, PMLA

“Quayson is a compelling writer, and the chapters effortlessly oscillate between local and global, past, present and future, which makes for a richly detailed story. This book is a must-read for people interested in African history, urban studies, transnationalism and the city of Accra.” — Geertrui Vannoppen, Africa

“[T]he book is significant contribution to post-colonial spatial and urban theory, contemporary examples of local communities interacting with global trends, and complex historical perspectives that push our understanding beyond colonialism as the only frame on modern-day Accra. Moreover, it provides all ethnographers with a fine and well-written example of how to narrate daily life and balance description with the historical and theoretical material.” — David Alexander Brown, Anthropological Notebooks

“Oxford Street, Accra is an erudite and accomplished book by one of Africa’s most prominent literary and cultural critics. Ato Quayson is astute in his use of critical theory to illuminate transforming African urban cultures, and he is creative in the aspects of urban space he chooses to analyze. He inventively depicts the tensions of the diverse imaginaries, calculations, and ethical sensibilities that cut across the conventional zones and distinctions of city life, giving rise to new connections near and far.” — AbdouMaliq Simone, author of For the City Yet to Come: Changing African Life in Four Cities

“A fresh portrait of a rising African metropolis by one of the most original and skilled critics of the African condition. Deeply researched, packed with detail, and bold in scope and analysis, Oxford Street, Accra is a unique addition to the growing body of work on contemporary African urbanism. This extraordinary book shows the extent to which the future of urban theory might well lie in the global South.” — Achille Mbembe, author of Critique de la raison nègre

Ato Quayson is a Fellow of the Ghana Academy of Arts and Sciences, the Royal Society of Canada, and in 2019 was elected Corresponding Fellow of the British Academy. He is a Professor of English at Stanford.

Professor Quayson has published 5 monographs and 8 edited volumes. His monographs include Strategic Transformations in Nigerian Writing (1997), Postcolonialism: Theory, Practice, or Process? (2000), Calibrations: Reading for the Social (2003), and Aesthetic Nervousness: Disability and the Crisis of Representation (2007). Oxford Street, Accra: City Life and the Itineraries of Transnationalism (2014) was co-winner of the Urban History Association's 2015 Best Book Prize (non-North America) and was named in The Guardian as one of the 10 Best Books on Cities in 2014. His edited books include Relocating Postcolonialism (with David Goldberg, 2001), African Literary Theory: An Anthology of Literary Criticism and Theory (with Tejumola Olaniyan, 2007), Fathers and Daughters: An Anthology of Exploration (2008), Labor Migration, Human Trafficking, and Multinational Corporations (with Antonela Arhin, 2012), The Cambridge History of Postcolonial Literature (2012), A Companion to Diaspora and Transnational Studies (with Girish Daswani, 2013), and The Cambridge Companion to the Postcolonial Novel (2016). He also wrote a new Introduction and Notes to Nelson Mandela’s No Easy Walk to Freedom (2003). He is currently completing Tragedy and Postcolonial Literature for Cambridge University Press and also working with Grace Tolequé on Accra Chic: A Locational History of Fashion in Accra for Intellect Books and Chicago University Press.

Professor Quayson was a Cambridge Commonwealth Scholar (1991-1994), Chief Examiner in English for the International Baccalaureate (2005-2007) and member of the European Research Council (2010-2017). He has also held Fellowships at the Du Bois Institute for African American Studies at Harvard (2004), and the Research Centre in the Humanities at Australian National University (2015). He was the 2011-12 Cornille Visiting Professor in the Humanities at Wellesley College and is founding editor of The Cambridge Journal of Postcolonial Literary Inquiry. He has lectured widely in Africa, Europe, Canada, the United States, Singapore, Turkey, Hong Kong, Australia, and various other places.

He is currently Vice-President, African Studies Association, and President of the ASA in November of 2019.

Be the first to review “Oxford Street, Accra: City Life and the Itineraries of Transnationalism” Cancel reply

Nearly All The Men In Lagos Are Mad (Pre-Order)

Death of an Empire: Kwame Nkrumah in Ghana and Africa

A Bit of Me

The Teller of Secrets