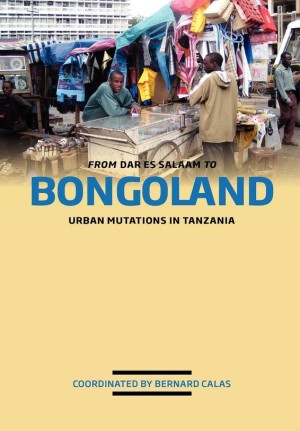 From Dar es Salaam to Bongoland: Urban Mutations in Tanzania

From Dar es Salaam to Bongoland: Urban Mutations in Tanzania

The name Dar es Salaam comes from the Arabic phrase meaning house of peace. A popular but erroneous translation is ‘haven of peace’ resulting from a mix-up of the Arabic words “dar” (house) and “bandar” (harbour). Named in 1867 by the Sultan of Zanzibar, the town has for a long time benefitted from a reputation of being a place of tranquility. The tropical drowsiness is a comfort to the socialist poverty and under-equipment that causes an unending anxiety to reign over the town. Today, for the Tanzanian, the town has become Bongoland, that is, a place where survival is a matter of cunning and intelligence (bongo means ‘brain’ in Kiswahili). Far from being an anecdote, this slide into toponomy records the mutations that affect the links that Tanzanians maintain with their principal city and the manner in which it represents them.

This book takes into account the changes by departing from the hypothesis that they reveal a process of territorialisation. What are the processes – envisaged as spatial investments – which, by producing exclusivity, demarcations and exclusions, fragment the urban space and its social fabric? Do the practices and discussions of the urban dwellers construct limited spaces, appropriated, identified and managed by communities (in other words, territories)? Dar es Salaam is often described as a diversified, relatively homogenous and integrating place. However, is it not more appropriate to describe it as fragmented?

As territorialisation can only occur through frequenting, management and localised investment, it is therefore through certain places – first shelter and residential area, then the school, daladala station, the fire hydrant and the quays – that the town is observed. This led to broach the question in the geographical sense of urban policy carried out since German colonisation to date. At the same time, the analysis of these developments allows for an evaluation of the role of the urban crisis and the responses it brings.

In sum, the aim of this approach is to measure the impact of the uniqueness of the place on the current changes. On one hand, this is linked to its long-term insertion in the Swahili civilisation, and on the other, to its colonisation by Germany and later Britain and finally, to the singularity of the post-colonial path. This latter is marked by an alternation of Ujamaa with Structural Adjustment Plans applied since 1987. How does this remarkable political culture take part in the emerging city today?

Prof Bernard Calas is a Geographer & Professor at the University of Michel de Montaigne, Bordeaux France.

Be the first to review “From Dar es Salaam to Bongoland: Urban Mutations in Tanzania” Cancel reply

Death of an Empire: Kwame Nkrumah in Ghana and Africa

Nearly All The Men In Lagos Are Mad

Of This Our Country

The Creative One: Life and Times of Jake Otanka Obetsebi-Lamptey

Peri-menopause: The Trip of a Woman!!