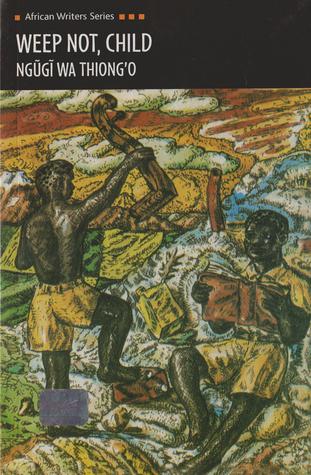 A powerful, moving story that details the effects of the infamous Mau Mau war, the African nationalist revolt against colonial oppression in Kenya, on the lives of ordinary men and women, and on one family in particular. Two brothers, Njoroge and Kamau, stand on a rubbish heap and look into their futures. Njoroge is excited; his family has decided that he will attend school, while Kamau will train to be a carpenter. Together they will serve their country – the teacher and the craftsman.

But this is Kenya and the times are against them. In the forests, the Mau Mau is waging war against the white government, and the two brothers and their family need to decide where their loyalties lie. For the practical Kamau the choice is simple, but for Njoroge the scholar, the dream of progress through learning is a hard one to give up.

#BookReview: Weep Not Child
#Author: Ngugi wa Thiong’o 🇰🇪
Type of work (Genre): Fiction
Number of pages: 134
Own or Borrowed: Own (purchased from a bookshop in Thika, Kenya)
#ReadIt: at hotel and airport

#OverallImpressions: This was a good read. The tale itself was tragic. I liked that it wasn’t very predictable. I loved how it tackled a delicate issue like land ownership in Kenya in the moments leading up to the postcolonial era from the different perspectives at play. I’m not sure I enjoyed it the way I expected to based on commentary from friends but I loved reading this book all the same and look forward to reading more by Ngugi.

#SomethingThatStoodOut: I absolutely loved that he incorporated words from his language, Gikuyu. This is something I wish more African writers do so I’m always excited to see it happen on the pages of books I read.

Recommend or nah: I definitely recommend it. It’s a classic piece of literature worth reading.

Kenyan teacher, novelist, essayist, and playwright, whose works function as an important link between the pioneers of African writing and the younger generation of postcolonial writers. After imprisonment in 1978, Ngũgĩ abandoned using English as the primary language of his work in favor of Gikuyu, his native tongue. The transition from colonialism to postcoloniality and the crisis of modernity has been a central issues in a great deal of Ngũgĩ's writings.

Ngũgĩ wa Thiong'o was born in Kamiriithu, near Limuru, Kiambu District, as the fifth child of the third of his father's four wives. At that time Kenya was under British rule, which ended in 1963. Ngũgĩ's family belonged to the Kenya's largest ethnic group, the Gikuyu. His father, Thiong'o wa Nducu, was a peasant farmer, who was forced to become a squatter after the British Imperial Act of 1915. Ngũgĩ attended the mission-run school at Kamaandura in Limuru, Karinga school in Maanguu, and Alliance High School in Kikuyu. During these years Ngũgĩ became a devout Christian. However, at school he also learned about the Gikuyu values and history and underwent the Gikuyu rite of passage ceremony. Later he rejected Christianity, and changed his original name in 1976 from James Ngũgĩ, which he saw as a sign of colonialism, to Ngũgĩ wa Thiong'o in honor of his Gikuyu heritage.

After receiving a B.A. in English at Makerere University College in Kampala (Uganda) in 1963, Ngũgĩ worked briefly as a journalist in Nairobi. He married in 1961. Over the next seventeen years his wife, Nyambura, gave birth to six children. In 1962 Ngũgĩ's play THE BLACK HERMIT was produced in Kampala. In 1964 he left for England to pursue graduate studies at the Leeds University in England.

The most prominent theme in Ngũgĩ's early work was the conflict between the individual and the community. As a novelist Ngũgĩ made his debut with WEEP NOT, CHILD (1964), which he started to write while he was at school in England. It was the first novel in English to be published by an East African author. Ngũgĩ used the Bildungsroman form to tell the story of a young man, Njoroge. He loses his opportunity for further education when he is caught between idealistic dreams and the violent reality of the colonial exploitation. THE RIVER BETWEEN (1965) had as its background the Mau Mau Rebellion (1952-1956). The story was set in the late 1920s and 1930s and depicted an unhappy love affair in a rural community divided between Christian converts and non-Christians.

A GRAIN OF WHEAT (1967) marked Ngũgĩ's break with cultural nationalism and his embracing of Fanonist Marxism. Ngũgĩ refers in the title to the biblical theme of self-sacrifice, a part of the new birth: "unless a grain of wheat die." The allegorical story of one man's mistaken heroism and a search for the betrayer of a Mau Mau leader is set in a village, which has been destroyed in the war. The author's family was involved in the Mau Mau uprising. Ngũgĩ's older brother had joined the movement, his stepbrother was killed, and his mother was arrested and tortured. Ngũgĩ's village suffered in a campaign.

In the 1960s Ngũgĩ was a reporter for the Nairobi Daily Nation and editor of Zuka from 1965 to 1970. He worked as a lecturer at several universities - at the University College in Nairobi (1967-69), at the Makerere University in Kampala (1969-70), and at the Northwestern University in Evanston in the United States (1970-71). Ngũgĩ had resigned from his post at Nairobi University as a protest against government interference in the university, be he joined the faculty in 1973, becoming an associate professor and chairman of the department of literature. It had been formed in response to his and his colleagues' criticism of English - the British government had made in the 1950s instruction in English mandatory.

The Trial of J.J. Rawlings: Echoes of the 31st December Revolution (1st Edition)