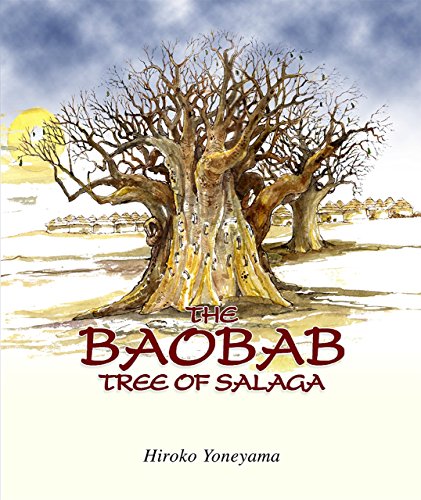 The Boabab Tree of Salaga

The Boabab Tree of Salaga

Dauda, a twelve-year old boy lives in a village north of Salaga with his parents. He often helps his father, who is a blacksmith, at the forge. He also grazes their sheep and goats.

One night, slave raiders captured everyone from his village. Dauda gets separated from his parents. He is taken to Salaga where he is chained to a big baobab tree before he is later sold off. From Salaga, he, together with many others are marched to the coast and made to board a ship to the Americas to be sold as slaves.

Two hundred years later, a stranger visits the same baobab tree at Salaga…who is this stranger?

Hiroko Yoneyama was boll in Hokkaido, Japan in 1958. A poster of the Biafran War (1967 - 1970) opened her young eyes to the world, especially Africa and this made her stall to think seriously about mankind.

She visited Ghana for the first time in 1989 as a tourist and later returned in 1994 as a professional Japanese language teacher at the Legon Centre for International Affairs and Diplomacy of the University of Ghana, Legon for twenty years.

It was because of her wish to know more about the Atlantic Slave Trade and to send the message about the Trade to children all over the world to give them hope and encourage them to be brave in the face of adversity that she came out with the book, The Baobab Tree of Salaga. She believes her role in life is to listen to the voiceless and speak up for the weak.

Hiroko loves to meet people from different cultures, with different lifestyles and ideas.

Kofi and the Ghost (The Adventures of Naughty Kofi #3)

The Contest and Other Spiderman Tales