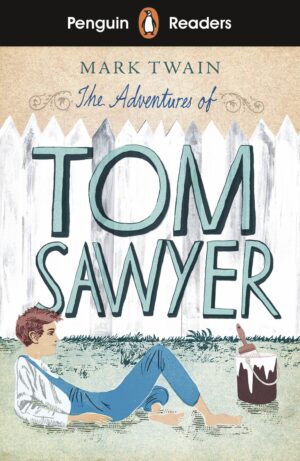 The Adventures of Tom Sawyer (1876) is the story of a boy in Missouri in the 1840s. Tom Sawyer’s parents are dead and he lives with his aunt in a small village next to the long Mississippi river. One night, Tom and his friend, Huckleberry Finn see Injun Joe kill Dr Robinson. “We can’t say anything about it. Or we will die,” says Tom.

Penguin Readers is a series of popular classics, exciting contemporary fiction, and thought-provoking non-fiction written for learners of English as a foreign language. Beautifully illustrated and carefully adapted, the series introduces language learners around the world to the bestselling authors and most compelling content from Penguin Random House. The eight levels of Penguin Readers follow the Common European Framework and include language activities that help readers to develop key skills.

The Adventures of Tom Sawyer, a Level 2 Reader, is A1+ in the CEFR framework. Sentences contain a maximum of two clauses, introducing the future tenses will and going to, present continuous for future meaning, and comparatives and superlatives. It is well supported by illustrations, which appear on most pages.

Samuel Langhorne Clemens, better known by his pen name Mark Twain, was an American author and humorist. He is noted for his novels Adventures of Huckleberry Finn (1885), called "the Great American Novel", and The Adventures of Tom Sawyer (1876).

Twain grew up in Hannibal, Missouri, which would later provide the setting for Huckleberry Finn and Tom Sawyer. He apprenticed with a printer. He also worked as a typesetter and contributed articles to his older brother Orion's newspaper. After toiling as a printer in various cities, he became a master riverboat pilot on the Mississippi River, before heading west to join Orion. He was a failure at gold mining, so he next turned to journalism. While a reporter, he wrote a humorous story, "The Celebrated Jumping Frog of Calaveras County," which proved to be very popular and brought him nationwide attention. His travelogues were also well-received. Twain had found his calling.

He achieved great success as a writer and public speaker. His wit and satire earned praise from critics and peers, and he was a friend to presidents, artists, industrialists, and European royalty.

However, he lacked financial acumen. Though he made a great deal of money from his writings and lectures, he squandered it on various ventures, in particular the Paige Compositor, and was forced to declare bankruptcy. With the help of Henry Huttleston Rogers, however, he eventually overcame his financial troubles. Twain worked hard to ensure that all of his creditors were paid in full, even though his bankruptcy had relieved him of the legal responsibility.

Born during a visit by Halley's Comet, he died on its return. He was lauded as the "greatest American humorist of his age", and William Faulkner called Twain "the father of American literature".

The Hound of the Baskervilles (Penguin Readers Starter Level)

Kofi in the Dentist’s Chair

Ananse and the Sticky Gum