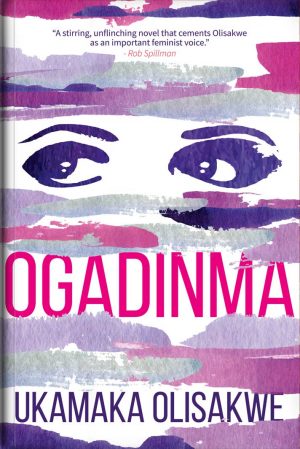 Ukamaka Olisakwe’s heart-wrenching novel tells the story of the naïve and trusting Ogadinma as she battles against Nigeria’s deeply-ingrained patriarchal systems in the 1980s, a time of coups, food shortages and religious extremism.

After a rape and unwanted pregnancy leave her exiled from her family in Kano, thwarting her plans to go to university, she is sent to her aunt’s in Lagos and pressured into a marriage with an older man.

As their whirlwind romance descends into abuse and indignity, Ogadinma is forced to channel all of her independence and resourcefulness into finding her voice and strength in the face of abuse and cultural expectations.

Born and raised in Kano State, Northern Nigeria, Ukamaka Olisakwe is a Nigerian novelist, short story writer and screenwriter. She completed her secondary education in Northern Nigeria and subsequently earned a degree in Computer Science from Abia State Polytechnic, in Aba, Nigeria.

In 2014 she was chosen as one of 39 of Sub-Saharan Africa’s most promising writers under the age of 40. Olisakwe’s writing has appeared in Catapult, the New York Times and The Rumpus and many more international journals. She wrote the screenplay for The Calabash, a Nigerian television series that premiered in 2015 on Africa Magic Showcase.

Ukamaka won the Vermont College of Fine Arts Emerging Writers Scholarship to pursue an MFA in Writing and Publishing in 2018. She currently lives in Vermont.

Be the first to review “Ogadinma” Cancel reply