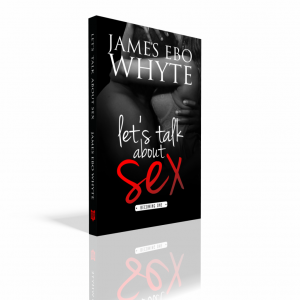 You are reading the blurb to help you make up your mind whether you should buy this book or not. Well, let me help you; buying this book may be one of the best investments you ever made.

Let’s Talk About Sex is about sex and much more. If you read this book with years of marriage behind you, you would wish you had read it earlier. If you read it before marrying, you will save yourself and your partner years of frustration and disgust.

James Ebo Whyte, popularly called Uncle Ebo Whyte, is known nationwide as an accomplished and award-winning playwright and highly-sought after motivational speaker and presenter of Food for Thought on JOY FM in Accra.

Uncle Ebo holds the Millennium Excellence Award for Literature, 2015, among many other awards. Since 2008, he has been writing, directing and producing a new play at the National Theatre, Accra, every quarter. He is also the publisher of the Rover Report Monthly magazine.

He is the husband of one wife, Florence, whom he married in 1983.

The Joy of Human Love

An Outline of Islamic Customary Law In Ghana

Strength in the Storm: When A Loved One Dies

All Things Bright and Beautiful

No! Don’t Touch Me There

The Genesis of Marriage