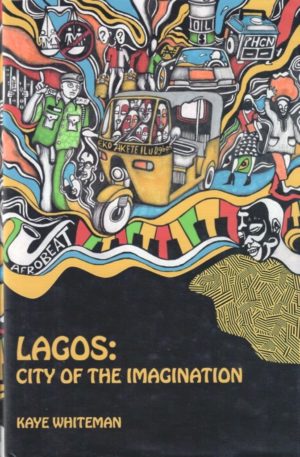 “I don’t think you can be in Lagos without becoming aware of its potency; when Lagos gets itself organised it will be extremely powerful; and already – without organisation – it is very powerful.” Rem Koolhaas, 2002

Lagos is fast becoming a global city – a place people visit for curiosity and the vibe as much as for business or family. The mesmerising energy and intensity of the city have to be experienced to be understood. But what is the story of Lagos? When did the city begin? Who were the first inhabitants? When did it become the city of iniquity and wisdom that continues to confound all who encounters it? Who have been the key chroniclers of this real yet imaginary city?

Veteran journalist and writer Kaye Whiteman has given us a gem that answers these questions and more. Lagos: City of the Imagination explains the origins of Lagos as both outpost of the Benin Empire and also the city run by the White Cap Chiefs. Whiteman shows that Lagos was always multicultural and cosmopolitan, with the Portuguese and later educated returnees from Sierra Leone and artisans from Brazil adding to the eclectic mix.

The book examines the key moments in the history of Lagos: from the concerted attack by the British in the 1860s, Independence in 1960, the 1966 coup through to FESTAC and the assassination of Murtala Muhammed. Also included are vivid character portraits of some of the most powerful Lagosians in history, from Oba Kosoko and Madam Tinubu, to well-regarded colonial figures such as Sir Bernard Bourdillon and those – like Lord Lugard – not so fondly remembered.

As the name suggests, Lagos: City of the Imagination deals extensively in those for whom Lagos is the backdrop of their work, from highlife musicians and Fela Kuti to Wole Soyinka and, more recently, the American-Nigerian writer Teju Cole.

Lagos: City of the Imagination is an absorbing and delightful “must-read” for anyone with an interest in one of the most dramatic cities of the 21st century.

Be the first to review “Lagos: City of the Imagination – Hardcover” Cancel reply

Tour of Duty: Journeys Around Nigeria

Achieving The Phenomenal In Africa

History of West Africa and the Ga Osu People (Hardcover)

Dangote’s Ten Commandments on Money: Lessons on How to Make Money from One of the World’s Richest Men