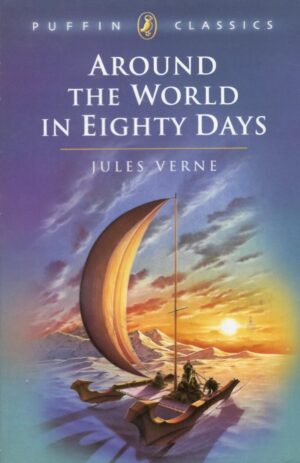 Around the World in Eighty Days

Around the World in Eighty Days

One night in the reform club, Phileas Fogg bets his companions that he can travel across the globe in just eighty days. Breaking the well-established routine of his daily life, he immediately sets off for Dover with his astonished valet Passepartout. Passing through exotic lands and dangerous locations, they seize whatever transportation is at hand—whether train or elephant—overcoming set-backs and always racing against the clock.

Jules Verne (1828-1905) was a French author best known for his tales of adventure, including Twenty Thousand Leagues under the Sea, Journey to the Center of the Earth, and Around the World in Eighty Days. A true visionary, Verne foresaw the skyscraper, the submarine, and the airplane, among many other inventions, and is now regarded as one of the fathers of science fiction.

Jules Gabriel Verne was born in the French port city of Nantes on 8 February, 1828, to Pierre Verne, a successful lawyer, and his wife Sophie. Verne published Five Weeks in a Balloon in 1863, an immediate hit which was followed by Journey to the Centre of the Earth (1864), From the Earth to the Moon (1865), and his two most inspiring books, Twenty Thousand Leagues Under the Sea (1869) and Around the World in Eighty Days (1872). Verne died of old age and illness on March 24, 1905.

The Mill on the Floss (FingerPrint! Classics)