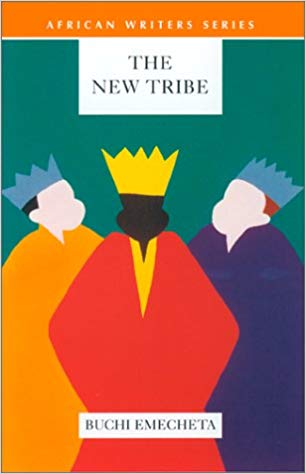 When a baby girl is abandoned at birth, Reverend Arlington and his wife Ginny are only too happy to adopt her. The media cover this moving story, and a Nigerian woman living in England takes more than a passing interest in the Arlingtons. She decides that they world provide the right Christian home for her own baby, Chester. Shortly afterwards, Chester is delivered to social services with a letter explaining that the Arlingtons should be his new parents. So young Chester enters the vicarage of the sleepy seaside village of St Simon. He is the only black child for miles around.

The New Tribe tells the story of Chester’s long search for his true identity, and the challenges he faces as a black child in a white family.

Buchi Emecheta OBE was a Nigerian novelist who has published over 20 books, including Second-Class Citizen (1974), The Bride Price (1976), The Slave Girl (1977) and The Joys of Motherhood (1979). Her themes of child slavery, motherhood, female independence and freedom through education have won her considerable critical acclaim and honours, including an Order of the British Empire in 2005. Emecheta once described her stories as "stories of the world…[where]… women face the universal problems of poverty and oppression, and the longer they stay, no matter where they have come from originally, the more the problems become identical."

From 1965 to 1969, Emecheta worked as a library officer for the British Museum in London. From 1969 to 1976 she was a youth worker and sociologist for the Inner London Education Authority, and from 1976 to 1978 she was a community worker.

Following her success as an author, Emecheta travelled widely as a visiting professor and lecturer. From 1972 to 1979 she visited several American universities, including Pennsylvania State University, Rutgers University, the University of California, Los Angeles, and the University of Illinois at Urbana-Champaign.

From 1982 to 1983 Buchi Emecheta, together with her journalist son Sylvester, ran the Ogwugwu Afor Publishing Company.