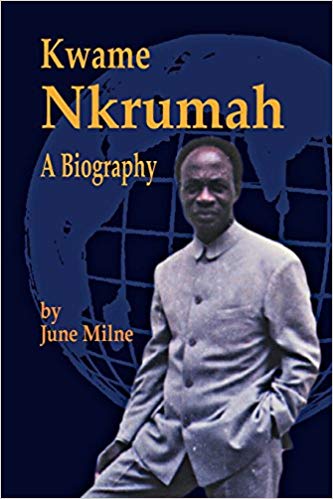 Very few statesmen have attempted or achieved so much as Kwame Nkrumah, a leading activist and theoretician of PanAfricanism. His work lives on and continues to inspire Africans, people of African descent and progressive movements worldwide.

In this new biography, June Milne traces the life and work of Kwame Nkrumah from his birth in Nkroful in the western province of the Gold Coast (Ghana) to his death in Bucharest, Romania on 27 April, 1972. The book contains much new material, notably relating to years Nkrumah spent in Conakry, Guinea after the military coup in Accra on 24 February, 1966 which ended his government in Ghana. It adds to information in the author’s book Kwame Nkrumah, The Conakry Years, published in 1990.

For the first time in a biography of Nkrumah, information is provided about all the books written by him. The circumstances in which they were written are explained, their contents examined, appraisal made of their significance and continuing impact on political developments in Africa and the Diaspora.

This is an authentic moving account of the life and work of “The Greatest African” (the words inscribed on his coffin in Guinea), by an author well qualified to write about him.

June Milne was born in Melbourne, Australia in 1920. She was educated at Cheltenham Ladies’ College and obtained a first class degree in Modern History at the University of London.

She met Kwame Nkrumah in 1957 and worked closely with him until his death.

In his will, Nkrumah appointed her his Literary Executor, and he left all his published and unpublished papers and the copyrights of all his writings and speeches to her.

After his publishers, Thomas Nelson Educational Publishing refused to print any further materials after Kwame Nkrumah's overthrow, he set up Panaf Books Ltd in London in 1968.

The new company bought the remaining books, rescuing them from the previous publishers' plans to pulp them.

Panaf kept in print the books Nkrumah had written before the coup, and published the new books he immediately began to write after arriving in Conakry in March 1966.

June Milne managed the company for more than 20 years and retired from publishing in 1987 to spend more time in her work as Nkrumah’s literary executor.

She collated, organised and preserved Nkrumah's archives of published and unpublished papers.

Mrs Milne authored three books "Kwame Nkrumah: Life After the Coup And the Conakry Period in 1990, a moving biography Kwame Nkrumah in 1974 and Kwame Nkrumah: The Conkrary Years, Life and Letters.

Be the first to review “Kwame Nkrumah: A Biography” Cancel reply

Proceedings of the Ghana Academy of Arts and Sciences (Volume I, 1963)