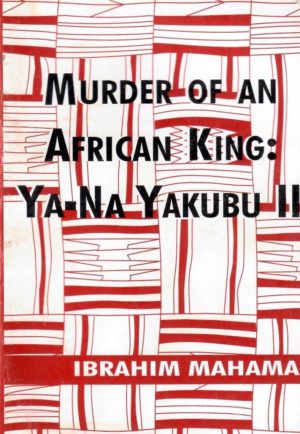 On March 27, 2002, Ya-Na, the Dagomba King of the Republic of Ghana, was murdered. More than five years after the guresome killing, the government has yet to arrest the murderers.

Author Ibrahim Mahama, himself a member of the royal family and a practising attorney, escaped into exile and now delivers a searing examination of the mysterious death of Ya-Naa as well as taking a closer look at the inner workings of his own country.

In Murder of an African King: Ya-Na Yakubu II, Mr. Mahama focuses on the two branches of the royal family — the Abudu Family and the Andani Family — and how Dagbon was ruled within the confines of a rotational succession system. Then, several years ago, the Abudu Family set in motion a series of actions designed to eliminate the rotational system in favour of one that would have a member of their family rule for an indeterminate time. Naturally, this was not acceptable to the members of the Andani Family.

Murder of an African King carefully traces the events leading up to the horrific violence of March 27, 2002 and its aftermath. It is deemed a landmark event in the history of Ghana. Mr. Mahama’s narrative is a compelling, detailed and passionate account of a major historical event that remains unsolved.

Ibrahim Mahama was born in Tibungu, a village in Northern Ghana. He had his secondary school education in the then Government Secondary School, Tamale from 1956 to 1962. In 1965, he received his L.L.B. Degree from the University of Ghana, having entered in 1962 to read law, and was called to the Ghana Bar as an attorney in 1966.

After practising law in his nation's capital, Accra, Mr. Mahama served in the government of the National Liberation Council as Commissioner for Forestry and then Commissioner for Information from 1967 to 1968. He was a Member of Parliament representing Tamale for from 1969 to 1972, and was a Presidential Candidate for the Social Democratic Front in Ghana's 1979 elections.

A member of the royal family of Dagbon Kingdom, the author in 1974 became Solicitor and Legal Adviser to the King, Ya-Na Yakubu II and served him until 2002.

The author includes among his hobbies swimming and reading.

Be the first to review “Murder of an African King: Ya-Na Yakubu II” Cancel reply