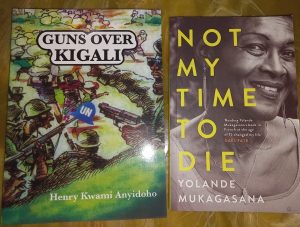 Bookset: Not My Time to Die & Guns Over Kigali (2 books)

Bookset: Not My Time to Die & Guns Over Kigali (2 books)

A pack of 2 books on the Kigali Genocide

Not My Time to Die

“Reading Yolande Mukagasana’s book in French at the age of 15 changed my life.”- Gaël Faye

Originally published as La mort ne veut pas de moi in 1997, this book was the first survivor testimony to be published about the 1994 genocide against the Tutsi in Rwanda.

In 1994 Yolande was an unconventional nurse and mother of three who enjoyed wearing jeans and designer glasses. She ran her own clinic in Nyamirambo and was planning a party for her wedding anniversary. But when genocide started everything changed. Targeted because she was a successful Tutsi woman, she was separated from her family and had to flee for her life.

Mukagasana’s gripping memoir describes the betrayal of friends and help that came from surprising places. Quick-witted and courageous, Yolande never lost hope she would find her children alive.

Translated from the French by Zoe Norridge.

The world has come to know about the carnage and human suffering in Rwanda through the reportage by newsmen. Guns Over Kigali is no such reportage. It is personal account of a UN peacekeeping soldier who was in the thick of the action to bring sanity into a country that had gone berserk.

Major General Anyidoho, the author of this book, survived the mayhem and the hectic moments in Rwanda and tells the world the true story of the events as he saw them. What is valuable in his account are the lessons he draws which have profound implications for UN peacekeeping around the world. Students in military institutions, researchers in war studies, politicians, policy makers, relief NGOs and the general reader interested in international relations will find this book a compelling and very useful reading.

In Rwanda the author was the Deputy Force Commander and Chief of Staff of the UN Assistance Mission for Rwanda (UNAMIR) where he collected the material for this book.

Major General Henry Kwami Anyidoho is a product of the Ghana Military Academy, the USA. Signals School at Fort Gordon, Georgia and the United States Marines Command and General Staff College in Quantico, Virginia. His peacekeeping career started with the UN Emergency Force II in Sinai. This was followed by further service in Lebanon, and Rwanda. As senior staff officer at the General Headquarters, Ministry of Defence Ghana, he was deeply involved in the planning of Liberia and Cambodia peace-keeping operations. In Rwanda he was the Deputy Force Commander and Chief of Staff of the UN Assistance Mission for Rwanda (UNAMIR) where he collected the material for this book.

Major General Anyidoho has participated in many international conferences and workshops on peacekeeping. He was the UN expert who helped to draft a document for the Chiefs of Staff of the central organ of the OAU on conflict resolution in 1996. The author progressed in active service to the rank of a Major General and retired after almost forty-two years of meritorious service. He was also decorated with the Distinguished Service Order for Gallantry. On retirement, the United Nations engaged him for a number of missions culminating in his appointment as the Deputy Joint Special Representative for the United Nations-African Union Hybrid Mission in the Darfur region of The distinguished General is a Senior Research Associate of the King’s College of London.

Yolande Mukagasana is a renowned Rwandan writer, public figure and campaigner for the remembrance of the 1994 genocide against the Tutsi.
She has authored four books about genocide and its aftermath, performed her testimony in the iconic Rwanda 94 touring theatre production and has received numerous international prizes for her work, including the Alexander Langer Foundation Prize for Testimony and Solidarity, the American Jewish Committee Moral Courage Award and an Honourable Mention for the UNESCO Education for Peace Prize.

Be the first to review “Bookset: Not My Time to Die & Guns Over Kigali (2 books)” Cancel reply

"Reading Yolande Mukagasana’s book in French at the age of fifteen changed my life. I realized that genocide is not a mass crime but a single murder repeated hundreds of thousands of times. With this testimony the genocide is no longer just a historical event, it is instead the story of a woman, a mother, a Tutsi. And this is what makes Yolande’s account universal." -- Gaël Faye

"Reading Not My Time to Die was an unsettling experience. I both loved and hated following Yolande in her excruciatingly long journey to safety in this beautifully written memoir. As someone who knew too little about the genocide against the Tutsi, reading it made me want to understand how such an abhorrent event could ever come about. This text is an intense, but exceptional, introduction to the history of the genocide, and I would recommend it to everyone. The 2019 English translation is skillfully executed and finally gives the English-speaking world access to Yolande Mukagasana’s memoir, originally published in French more than two decades ago." -- Kiera Fields, Africa in Words

Kenkey For Ewes And Other Very Short Stories

Sam: A Life of Service to God and Country

Amu the African: A Study in Vision and Courage