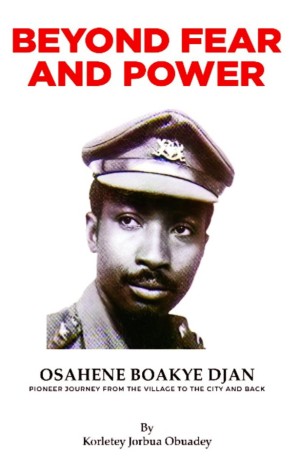 Beyond Fear and Power: Osahene Boakye Djan – Pioneer Journey from the Village to the City and Back

Beyond Fear and Power: Osahene Boakye Djan – Pioneer Journey from the Village to the City and Back

On 2nd June, 1979, the military high command of the Ghana Armed Forces picked up intelligence of an impending coup against their regime from the 5 Battalion, the only fighting unit in Accra at the time.

General Odartey Wellington, the then Army Commander, informed his lower commanders to take steps to order Captain Boakye Djan, the D Company Commander of the 5 Battalion of Infantry to stop it.

On 4th June, 1979, Captain Boakye Djan emerged to become the substantive head of government and official spokesperson of the Armed Forces Revolutionary Council of Ghana.

This is the story of one of Africa’s great military masterminds and why he has survived it all.

Jorbua Obuadey was educated at the Rev. John Teye Memorial Institute and he had his secondary education at the Presbyterian Boys Secondary School Legon.

He has a Diploma in Film Studies from the Academy of Screen Arts and a Degree in Psychology from the University of Cape Coast.

He is a student and activist of the African Revolution.

Beyond Fear and Power is his first historical biography.

Be the first to review “Beyond Fear and Power: Osahene Boakye Djan – Pioneer Journey from the Village to the City and Back” Cancel reply

The Political History of Ghana (1950-2013): The Experience of a Non-Conformist (Pre-Order)