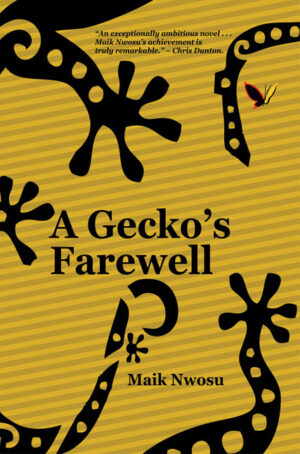 A Gecko’s Farewell is a novel about three Africans from different parts of the continent who meet in the spirit(online) and plan to found a School of Stories.

Etiaba a village school teacher, loses his job and moves to the capital city and its world of prayer contractors and hope merchants. Mzilikazi’s is the story of the homeless spectre, the boy soldier, the fugitive the exile – a black South African dislocated under the apartheid regime. Nadia is a radial student of photography at the American University in Cairo. She becomes a photojournalist and takes the picture of an Islamist terrorist, an act that endangers her.

These three characters eventually escape from Africa, but Africa is in a sense inescapable.

Maik Nwosu is an associate professor of English at the University of Denver, Colorado. He worked as a journalist (and received the Nigeria Media Merit Award for Journalist of the Year) before moving to Syracuse University, New York for a Ph.D in English and Textual Studies.

His poems and stories have appeared in Okike, Drumvoices Revue, New Writing 14, Dublin Quarterly, El Ghibli, Fiction International, and Agni Online. Nwosu is a fellow of the Akademie Schloss Solitude, Stuttgart, Germany and the Civitella Ranieri Center in Umbertide, Italy, as well as a member of the Phi Beta Delta Honor Society for International Scholars.

He has also published two critical texts, Markets of Memories: Between the Postcolonial and the Transnational (Africa World Press, 2011) and The Comic Imagination in Modern African Literature and Cinema: A Poetics of Laughter (Routledge, 2016)

Be the first to review “A Gecko’s Farewell” Cancel reply