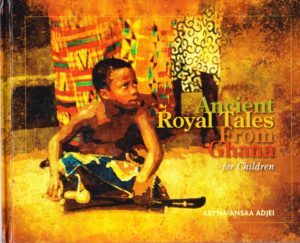 This book teaches children the history of some ancient Ghanaian Kings and Queens. Agokoli of the Ewes, Osei Tutu I of the Asante, Dode Akaibi of the Ga and Ndewura Jakpa of the Gonja are some of the royals featured here.

A long, long time ago, various kings and queens ruled over the peoples in the areas of West Africa that became the Gold Coast when Europeans came and colonised them. These kings and queens were famous among their own and other tribes. Often, the kings and queens that were infamous for being cruel were the ones whose stories traveled widest.

All in all, we have a rich culture of royalty in Ghana. This book will take you on a trip through our royal history and will teach you lessons of bravery, honour, honesty and brotherhood.

Abyna-Ansaa Adjei graduated with First Class Honours in Publishing from the Kwame Nkrumah University of Science and Technology, Kumasi, Ghana in 2000. In 2004, she graduated from the London School of Economics and Political Science with a Master of Science degree in Voluntary Sector Organisation.

Kente for a King (Hardcover)