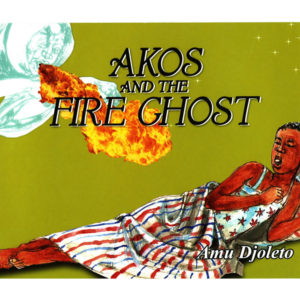 Akos and the Fire Ghost

Akos and the Fire Ghost

Akos and her family lived happily together until a tragic incident occurred, leading to her father’s death. Life became difficult, hence Akos had to become a maid servant in the city, in order to help her family. In this intriguing story, find out how Akos was scared by a pharmacist who told her stories about the fire ghost, and how Akos went back to school.

Amu Djoleto was born at Manya Kpogunor, Manya Krobo, Ghana, the son of Frederick Badu, a Presbyterian minister, and Victoria Shome Tetteh, "a modest trader". He was educated at Accra Academy and St. Augustine's College, Cape Coast before reading English at the University of Ghana. He joined Ghana's Ministry of Education in the 1960s as a teacher and education officer. After studying textbook production at the Institute of Education, University of London, he returned to Ghana to edit the Ghana Teachers' Journal. At one point heading the Ministry of Education's publishing programme, he has continued to work for the Ministry of Education.

Djoleto contributed to the poetry anthologies Voices of Ghana (1958) and Messages (1970), and his poems were collected in Amid the Swelling Act.[2] He is best known for his novels, the first of which was The Strange Man (1967).

The Evil King Who Destroyed Himself: A Nigerian Folktale (African Folktale Series)