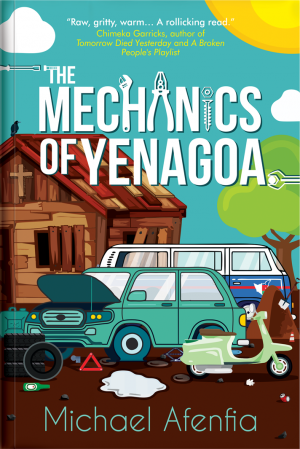 The Mechanics of Yenagoa

The Mechanics of Yenagoa

Ebinimi, star mechanic of Kalakala Street, is a man with a hapless knack for getting in and out of trouble. Some of his troubles are self-inflicted: like his recurring entanglements in love triangles; and his unauthorised joyriding of a customer’s car which sets off a chain of dire events involving drugs, crooked politicians, and assassins. Other troubles are caused by the panorama of characters in his life, like: his sister and her dysfunctional domestic situation; the three other mechanics he employs; and the money-loving preacher who has all but taken over his home.

The story is fast-paced with surprising twists and a captivating plot – a Dickenesque page-turner. This is Ebinimi’s story but it is about a lot more than him. It is an exploration of the dynamics between working-class people as they undertake a colourful tour of Yenagoa, one of Nigeria’s lesser-known cities, while using humour, sex, and music, as coping mechanisms for the everyday struggle.

It is a modern-classic tale of small lives navigating a big city.

A writer, social commentator and public intellectual, Michael Afenfia doesn’t believe in boundaries. He has crisscrossed genres in his writing and is never afraid of trying out new things.

Although a lawyer by training with years of experience in banking and in the public service, writing has always been his passion.

Between 2014 and 2016, he served as Chairman of the Association of Nigerian Authors (ANA) Bayelsa State Chapter. He currently resides in Canada with his family, but continues to mentor young creatives in Nigeria.

Be the first to review “The Mechanics of Yenagoa” Cancel reply