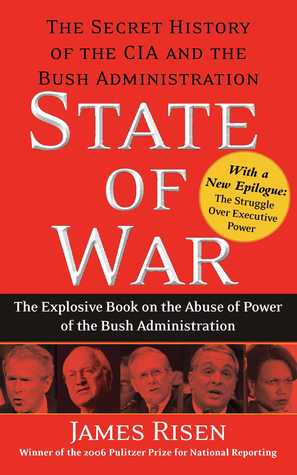 State of War: The Secret History of the CIA and the Bush Administration (Hardcover)

State of War: The Secret History of the CIA and the Bush Administration (Hardcover)

James Risen has broken story after story on the abuses of power of the Bush administration.

From warrantless wiretapping to secret financial data mining to the CIA’s rogue operations, he has shown again and again that the executive branch has dangerously overreached, repudiated checks and balances on its power, and maintained secrecy even with its allies in Congress. In no small part thanks to Risen and State of War, the “secret history” of the Bush years has now come partially into view.

In a new epilogue for the paperback edition, Risen describes the two-front war that President Bush is now fighting: at home against Congress and the Supreme Court, as his administration is increasingly reined in from its abuses; and in the Middle East, where George W. Bush’s great gamble to bring a democratic revolution is failing radically. We must learn the lessons of Risen’s history now, before it is too late.

Be the first to review “State of War: The Secret History of the CIA and the Bush Administration (Hardcover)” Cancel reply

How to Be Like Women of Influence: Life Lessons from 20 of the Greatest

Amu the African: A Study in Vision and Courage

Gandhi: An Autobiography – The Story of My Experiments With Truth

You May Plow Here: The Narrative of Sara Brooks

Soldiers of Fortune: Nigerian Politics from Buhari to Babangida (Hardcover)