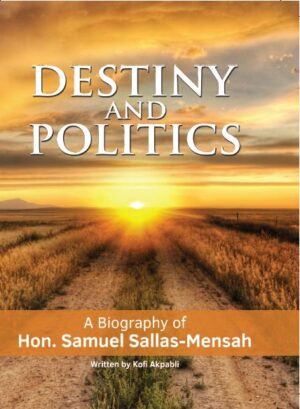 Destiny and Politics: A Biography of Hon. Samuel Sallas-Mensah

Destiny and Politics: A Biography of Hon. Samuel Sallas-Mensah

From a humble beginning as the son of a farmer in a relatively small town, Hon. Samuel Sallas-Mensah, four terms MP for Upper West Akim would perhaps have ended up as a farmer too. In those days, children took after their parents’ trades. Sallas got the chance to go to America and the entire course of his life changed. After a distinguished career in accountancy in the US and later in Nigeria, destiny led his way once more but this time to the country of his birth, Ghana, where eventually, a new career window opened in his life – politics.

As a Member of the Consultative Assembly his accounting and financial acumen were in evidence as he actively contributed to the District Assembly Common Fund. And as a Member of Parliament he was instrumental in instituting the live television coverage of the sitting of the Public Accounts Committee – legacies to the nation that survive today.

In this compelling biography the reader come face-to-face with this influential man of few words who is famed to have friends and access to both sides of the Ghanaian political divide. But what would Sallas be remembered for most, a politician, a chartered accountant or family man? More importantly, where else will destiny lead him to?

“Crispy-delicious narratives, refreshingly-garnished insights. This fascinating biography of a patriot never finishes astonishing you with the twists and turns. But it is the authoritative revelations about a nation and its people that makes this book destined to be relevant to the politics of Ghana.” ~ Business & Financial Times

Kofi Akpabli is a Ghanaian academic, journalist, publisher, tourism consultant and cultural activist. He is a two-time winner of the CNN Multichoice African Journalist for Arts and Culture Awards. His latest work ‘Made in Nima’ has been featured in the new Commonwealth Anthology which was published in May 2016 Safe House: Explorations into Creative Non-Fiction.

Akpabli has four books to his credit and currently works as a lecturer at Central University College in Ghana. He is a founding member of Ghana Cultural Forum and has participated in Xplore FrankfurtRheinemann 2012, Tallberg Forum, Sweden 2011, Berlin Art Festival 2010 and the Düsseldorf Art Preview 2010.

Be the first to review “Destiny and Politics: A Biography of Hon. Samuel Sallas-Mensah” Cancel reply

Africa: A Continent on Bended Knees

I Spoke for Freedom: History and Politics of the Ghana Press

The Corrupt Elites: Anatomy of Power and Wealth in Ghana