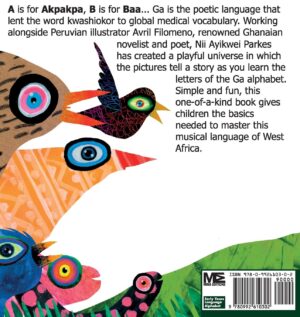 A is for Akpakpa, B is for Baa…

Ga is the beautiful, poetic language that lent the word kwashiokor to global medical vocabulary.

Working alongside Peruvian illustrator Avril Filomeno, renowned Ghanaian novelist and poet, Nii Ayikwei Parkes has created a playful universe in which the pictures tell a story as you learn the letters of the Ga alphabet.

Simple and fun, this one-of-a-kind book gives children the basics needed to master this musical language of West Africa.

Bonus: This picture book includes a colourful glossary with Ewe, Dagbani and Akan as well as French and English translations for all the words!

Nii Ayikwei Parkes is an author and performance poet who has performed on major stages across the world, including at The Royal Festival Hall and at a reading for the London Mayor’s vigil on July 14, 2005 (in response to the London bombings).

He is the author of the poetry chapbooks: Eyes of a Boy, Lips of a Man (1999), M is for Madrigal (2004), a selection of seven jazz poems and Ballast (2009), an imagination of the slave trade by balloon. His poem, Tin Roof, was selected for the 'Poems on the Underground' initiative in 2007 and his novel, Tail of the Blue Bird (Jonathan Cape, 2009) has been hailed by the Financial Times as 'a beautifully written fable... simple in form, but grappling with urgent issues.'

Nii is the Senior Editor at flipped eye publishing, a contributing editor to The Liberal, a former poet in residence at The Poetry Café, a 2005 associate writer in residence on BBC Radio 3, and has held visiting positions at the University of Southampton and California State University.

As a socio-cultural commentator and advocate for African writing, Nii has led forums internationally, has sat on discussion panels for BBC Radio with literary heavyweights such as Booker winners, Margaret Atwood and A.S. Byatt, and he runs the African Writers’ Evening series, at the Poetry Café in Covent Garden.

In 2007 he was awarded Ghana’s National ACRAG award for poetry and literary advocacy.