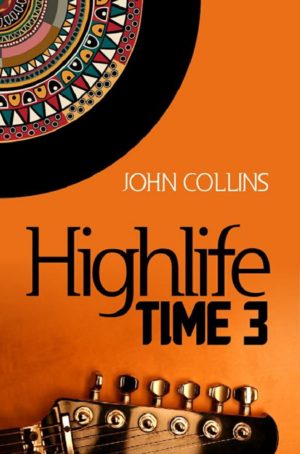 Highlife is Ghana’s most important modern home grown dance-music that has its roots in traditional music infused with outside influences coming from Europe and the Americas. Although the word ‘highlife’ was not coined until the 1920s, its origins can be traced back to the regimental brass bands, elite-dance orchestras and maritime guitar and accordion groups of the late 19th and very early 20th centuries. Highlife is, therefore, one of Africa’s earliest popular music genres.

The book traces the origins of highlife music to the present – and include information on palmwine music, adaha brass bands, concert party guitar bands and dance bands, right up to off-shoots such as Afro-rock, Afrobeat, burger highlife, gospel highlife, hiphop highlife (i.e. hiplife) and contemporary highlife.
The book also includes chapters on the traditional background or roots of highlife, the entrance of women into the Ghanaian highlife profession and the biographies of numerous Ghanaian (and some Nigerian) highlife musicians, composers and producers. It also touches on the way highlife played a role in Ghana’s independence struggle and the country’s quest for a national – and indeed Pan-African – identity.

The book also provides information on music styles that are related to highlife, or can be treated as cousins of highlife, such as the maringa of Sierra Leone, the early guitar styles of Liberia, the juju music of Nigeria the makossa of the Cameroon/ It also touches on the popular music of Ghana’s Francophone neighbours.

There is also a section on the Black Diasporic input into highlife, through to the impact of African American and Caribbean popular music styles like calypsos, jazz, soul, reggae, disco, hiphop and rap and dancehall. that have been integrated into the highlife fold. Thus, highlife has not only influenced other African countries but is also an important cultural bridge uniting the peoples of Africa and its Diaspora.

John Collins is a naturalised Ghanaian of British decent who has been active in the Ghanaian/West African music scene since 1969 as a guitarist, band leader, music union activist, journalist, writer, music teacher and archivist. In the 1970s he operated his Bokoor Highlife band and over the years has worked, recorded and played with numerous Ghanaian and Nigerian artists and bands such as the Jaguar Jokers, Francis Kenya, E.T. Mensah, Abladei, Fela Anikulapo-Kuti, Koo Nimo, Kwaa Mensah, Victor Uwaifo, Bob Pinodo, the Bunzus, the Black Berets, T.O. Jazz, Atongo Zimba and Aaron Bebe Sukura. He has published ten books and scores of journalistic and academic papers on African popular music and been involved with many films on Ghanaian popular, art and traditional music.

He obtained his first degree from the University of Ghana in 1972 and his Doctorate in Ethnomusicology at the State University of New York at Buffalo in 1994. In 1982 he opened his Bokoor Recording Studio and in 1987 was made an honorary life-member of the International Association for the Study of Popular Music (IASPM). During the 1990s, Collins was Technical Director of the three-year joint Universities of Ghana/Mainz African Music Re-documentation Project, and for seven years was with the Ghana National Folklore Board of Trustees/Copyright Administration. Between 1997 and 2013, he was co-leader of the Local Dimension highlife band.

He is currently a Patron of the Musicians Union of Ghana (MUSIGA) and a Full Professor of the Music Department at the University of Ghana at Legon, where he has been teaching since 1995. He is also Chairman of the BAPMAF African Popular Music Archives NGO.

More information about the author and the book can be found at http://highlifetime.com/.

Be the first to review “Highlife Time 3” Cancel reply

10 Strategies For Making Top Grades at the University

A Journey Through Careers: Business & Administration