Log In
View cart “Folktale Book Set (5 books)” has been added to your cart. 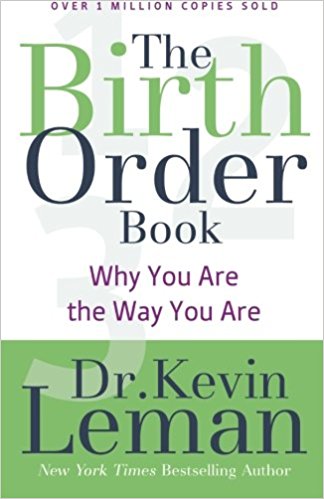 The Birth Order Book: Why You Are The Way You Are

The Birth Order Book: Why You Are The Way You Are

Ever wonder why you just can’t get along with certain people? Why you pick the friends you do? Why you chose the career path you’re on?

It’s all about birth order.

Birth order powerfully influences who you are, whom you marry, the job you choose, and the kind of parent you are. The Birth Order Book will help you understand yourself, get along better with others, overcome ingrained tendencies you never thought you could get rid of, be more successful in the workplace, and be a more effective parent. And if you don’t fit the typical mold for your birth order, you’ll find out why.

Thousands of people have unlocked the secrets of birth order already. Shouldn’t you be one of them?

Dr. Kevin Leman is an internationally known psychologist and radio and television personality. He has made house calls through hundreds of radio and television programs, such as Fox & Friends, FOX’s The Morning Show, Today, The 700 Club, CBS’s The Early Show, In the Market with Janet Parshall, and Focus on the Family, and has served as a contributing family psychologist to Good Morning America. A New York Times bestselling author, Dr. Leman has written more than forty books, including Making Children Mind without Losing Yours and Have a New Kid by Friday. Dr. Leman and his wife, Sande, live in Tucson, Arizona. They have five children and four grandchildren.

Dr. Kevin Leman is an internationally recognized psychologist, author, and media personality. He was the first to popularize Adlerian psychological concepts in the United States, which are based on birth-order and family dynamics. Dr. Leman holds Bachelor's, Master's, and Doctorate degrees in clinical psychology from the University of Arizona.

Dr. Leman is the founder and president of "Couples of Promise", an organization designed and committed to helping couples remain happily married. He is also the founder of MatchWise.com, a Christian online dating service based on his research in birth-order dynamics.

His professional affiliations include the American Psychological Association, American Federation of Radio and Television Artists, National Register of Health Services Providers in Psychology, and the North American Society of Adlerian Psychology.

Be the first to review “The Birth Order Book: Why You Are The Way You Are” Cancel reply