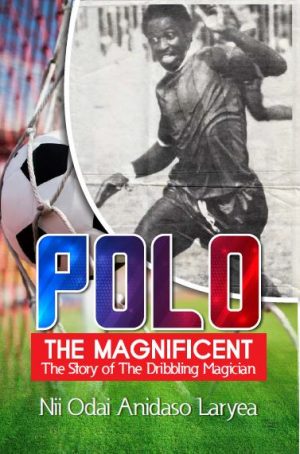 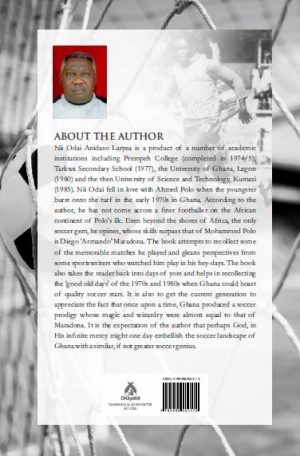 Polo the Magnificent: The Story of the Dribbling Magician

Polo the Magnificent: The Story of the Dribbling Magician

Nii Odai Anidaso Laryea is a product of a number of academic institutions including Prempeh College (completed in 1974/5), Tarkwa Secondary School (1977), the University of Ghana, Legon (1980) and the then University of Science and Technology, Kumasi (1985).

Nii Odai fell in love with Ahmed Polo when the youngster burst onto the turf in the early and mid-1980s in Ghana. According to the author, he has not come across a finer footballer on the African continent of Polo’s ilk. Even beyond the shores of Africa, the only soccer gem, he opines, whose skills surpass that of Mohammed Polo is Diego ‘Armando’ Maradona.

The book attempts to recollect some of the memorable matches he played and gleans perspectives from some sportswriters who watched him play in his hey-days. The book also takes the reader back into days of yore and helps in recollecting the ‘good old days’ of the 1970s and 1980s when Ghana could boast of quality soccer stars. It is also to get the current generation to appreciate the fact that once upon a time, Ghana produced a soccer prodigy whose magic and wizardry were almost equal to that of Maradona.

It is the expectation of the author that perhaps God, in His infinite mercy might one day embellish the soccer landscape of Ghana with a similar, if not greater soccer genius.

Be the first to review “Polo the Magnificent: The Story of the Dribbling Magician” Cancel reply

A Memoir of a Pragmatic Ghanaian Diplomat

I Am Zlatan: My Story On and Off the Field

The Artist: Being Iniesta

Money Brain: Career and Money Management in Your 20s and 30s

Is There Not A Cause…To Rant?

The Man in the Middle