Log In
View cart “Unfinished Journey: The Life and Times of VCRAC Crabbe” has been added to your cart. 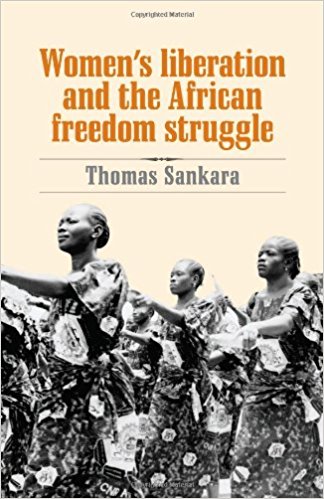 The women and men of our society are all victims of imperialist oppression and domination. That is why they wage the same battle. The revolution and women’s liberation go together. We do not talk of women’s emancipation as an act of charity or out of a surge of human compassion. It is a basic necessity for the revolution to triump. ~ Thomas Sankara

Thomas Sankara, leader of the 1983-87 revolution in Burkina Faso in West Africa, not only spoke to the challenges confronting women’s struggle for liberation in that continent. Convinced of the need for a Marxist understanding of human society, he explains here the origins of women’s oppression and puts forward a political course in the struggle to eradicate it.

GHS10 to deliver within Accra and Tema. Delivery outside the Accra/Tema for GHS20.

Captain Thomas Sankara was the leader of the Burkinabe Revolution. In the former Upper Volta known today as Burkina Faso, a group of men decided to launch a revolution that would enable the country "to accept the responsibility of its reality and its destiny with human dignity". Thomas Sankara belongs to the group of African leaders who wanted to give the continent in general and their countries in particular a new socio-political dimension.He was the hope of the African youth before being coldly murdered by his best friend Blaise Compaore.

Born in Yako, Upper Volta now Burkina Faso,on December 21,1949 was a charismatic left-leaning leader in West Africa. He was sometimes nicknamed "Tom Sank". He was considered by some to be an "African Che Guevara".

A captain in the Upper Volta Air Force, he was trained as a pilot. He was a very popular figure in the capital of Ouagadougou. The fact that was he was a decent guitarist and liked motorbikes may have contributed to his charisma.

Sankara was appointed Secretary of State for Information in 1981 and became Prime minister in 1983. He was jailed the same year after a visit by Jean-Christophe Mitterrand ; this caused a popular uprising.

A coup d'Etat organized by Blaise Compaore made Sankara President on August 4, 1983, at the age of 33. The coup d'Etat was supported by Libya which was, at the time, on the verge of war with France in Chad .

Sankara saw himself as a revolutionary and was inspired by Cuba and Ghana's military leader, Flight Lt. Jerry Rawlings. As president, he promoted the "Democratic and Popular Revolution" (RDP Revolution Democratique et Populaire).

Improving women's status was one of Sankara's explicit goals, that was unprecedented in West Africa. His government banned female circumcision, condemned polygamy, and promoted contraception.

The Burkinabe government was also the first African government to claim that AIDS was a major threat for Africa.

In 1984, on the first anniversary of his accession, he renamed the country Burkina Faso, meaning "the land of upright people" in Mossi and Dyula, the two major languages of the country. He also gave it a new flag and wrote a new national anthem.

On October 15, 1987 Sankara was killed in a coup d'Etat organized by his former colleague Blaise Compaore

A week prior to his death Sankara addressed people and said that "while revolutionaries as individuals can be murdered, you cannot kill ideas."

Africa in Search of Prosperity

The Leader Who Had No Title: A Modern Fable on Real Success in Business and in Life

Kiss That Frog! 12 Great Ways to Turn Negatives into Positives in Your Life and Work