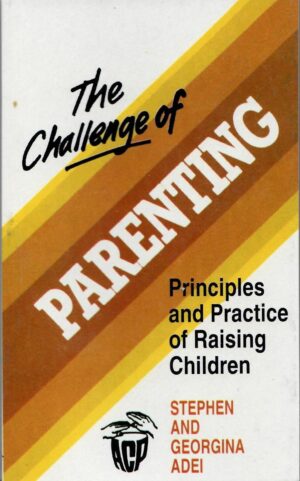 The Challenges of Parenting: Principles and Practice of Raising Children

The Challenges of Parenting: Principles and Practice of Raising Children

Children are a gift from God and if we really value the Giver, we would also appreciate the responsibilities that go with it.

With this, the authors of this book challenge parents to the task of raising their children to be mature adults , balanced in every sphere of their lives. From the Bible and from their own rich experience, Stephen and Georgina give practical advice to help parents in this noble duty of bringing up their children.

Professor Emeritus Stephen Adei, Companion of the Order of the Volta, was born in Hwiremoase on 14th December 1948. He holds a PhD. in International Economics (Sydney), MSc. in Development Economics (Strathclyde, UK), BSc. Economics (Univ. of Ghana), Bachelor of Divinity (London), Master of Theology (UNISA). He is a Chartered Marketer, Chartered Company Secretary, and holds a Diploma in Marriage Counselling.

From 2013 to 2018 he was with Ashesi University College as Dean of Arts and Sciences and Professor of Leadership and Economics after being with Pentecost University College, Accra from 2009 to 2013 in a similar capacity. In March 2019 Ashesi University conferred on him the title of an Emeritus Professor. He is currently Chairman of the Council of Accra College of Medicine, Executive Chairman of Ghana Christian International High Schools, Patron of the Chartered Institute of Marketing Ghana and serves on many other corporate and institutional boards including the Judicial Council of Ghana, two Mutual Funds and a Bank. He is the immediate past Chairman of the National Development Planning Commission as well as the Ghana Revenue Authority.

Between 1st January 2000 and 14th December 2008, when he reached the statutory retiring age of 60 years, he was the Director-General and First Rector of the Ghana Institute of Management and Public Administration (GIMPA). Under his leadership, GIMPA was transformed from a small, under-resourced, and sub-vented Institute to the most successful organization under the Government of Ghana’s Public Sector reform and the only Public University in Africa that was self-sufficient financially with a clear strategy to sustain that feat but for the fact that in the public sector of patrimonial third world societies, succession planning and policy continuity is often beyond many a leader’s control of influence.

Prior to becoming Director General of GIMPA, he was, among others, Head of UN System in post-Apartheid South Africa (September 1994-February 1995), United Nations Resident Coordinator and UNDP Resident Representative in Namibia (1995-1999), Senior Economist and Chief of the Directorate of Africa Bureau, UNDP, New York (1989-1995); Senior Economist of the Commonwealth Secretariat, London (1986-1989) and staff of the Capital Investments Board (now Ghana Investment Promotion Centre – GIPC) rising to Deputy Director and Head of Research (1973-1985). In 1971, he was an assistant economist in the Ministry of Finance of Ghana. He has taught Economics and/or Leadership at the University of Sydney (Tutor), the University of Ghana, Pentecost University and Ashesi University and has undertaken several consultancy assignments nationally and internationally.

As a scholar, Professor Emeritus Adei has authored and co-authored more than 25 books and 8 book chapters. He has also written more than 100 articles, keynote addresses and papers. Among his well-known books are:

The Promise of Leadership: The Chances of Ghana Having the Leadership to Move the Country from Third to First World

Retirement Planning: Taking the Tire out of Retirement

The latest books written by Prof Emeritus Stephen Adei are:

With his wife Mrs. Georgina Adei, whom he describes as the best woman God made, and co-founders of the top-rated Ghana Christian International High Schools, in addition to the many marriage books co-authored by them, their nine-volume Papa and Nana Series dedicated to making all 5 to 6-year-olds literate are already with the publishers. The Adeis’ have four adult children – Stephen, Eunice, Priscilla and Timothy, and four grandchildren and counting.

Looking into the future like Caleb who asked God to give him the unconquerable mountain of the Jebusite as his inheritance at age 85, Emeritus Professor Adei, thinks “Life really begins at 70” as he embarks on the journey to establish a Ghana Institute of Governance and Leadership to equip societal leaders, implement his Zero-tolerant Millionaires Club with young professionals to show that they can be “Rich and Holy”, tackle a truly Multi-Million Modern City and continue to preach the good news of the gospel to all sinners the joyful message that Jesus saves sinners like him! His secret passion and desire is for Ghana to be a fully developed first world country at 100 and that his vision of GIMPA as a Leadership Institute and catalyst in that course will be restored and not become a miniature Legon, his proud Alma Mata which gave him a golden medallion as one of its outstanding economics products.

Be the first to review “The Challenges of Parenting: Principles and Practice of Raising Children” Cancel reply

Crossing the Bar: The Story of Daniel Opong Amoafo (DO)

An Outline of Islamic Customary Law In Ghana

The Joy of Human Love

Apples in A Seed: Unleashing the Unique

Called Out of My Country

Letters To My Future Wife

Wisdom, Faith and a Song

They Touched Us for Good

The Hate U Give: Collector’s Edition (Hardcover)