Log In
View cart “The Sum of All Fears” has been added to your cart. 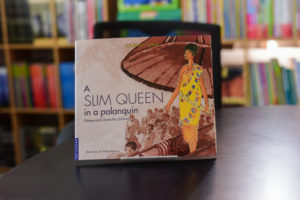 A Slim Queen in a Palanquin: Verses and Chants for Children

A Slim Queen in a Palanquin: Verses and Chants for Children

“Atukwei Okai has more skill with purely rhythmic effect thann any other living poet. Okai has little hauteur. His windows lie open, and between the panes drift love and lush vegetation. Poetry is what happens when the air-conditioning fails.” Robert Fraser, West African Poetry, A Critical History

Introduce your children to this beautifully-illustrated trilogy of verses and chants from the famed poet, Atukwei Okai.

A Slim Queen in a Palanquin is a collection of verses and chants for children. And it comes at last to fill the long-starved world of our children with music and fantasy, beauty and joy.

Prof. Atukwei Okai was born in Accra, Ghana, in 1941, he had his elementary education in Northern Ghana, then attended Methodist Middle Boys’ School (Accra) and the Accra High School, before going to Moscow in 1961, where he earned his M.A. (Lit.) in 1967.

Okai’s poems have been translated into several languages and have appeared in anthologies and several prominent international journals.

He is very much a performance poet, and his poems are rooted in the oral tradition, virtually inseparable from traditional African music and dance. The poems are also politically radical and socially conscious, one of his great concerns being Pan-Africanism. Among his collections of verse are Flowerfall (1969), Oath of the Fonton-from and Other Poems (1971), and Logorligi Logarithms (1974). The last title juxtaposes the Ga and English words for the same mathematical concept, thus indicating Okai's parallel traditional and modern consciousness as a poet.

Be the first to review “A Slim Queen in a Palanquin: Verses and Chants for Children” Cancel reply

What the Dog Saw: And Other Adventures

The Two Gentlemen of Verona (A Shakespeare Children’s Story)